As we all know, the blockchain is essentially a non-tamperable distributed ledger, which is very suitable for solving the problem of trust. In reality, blockchain is often used for bookkeeping and transactions. For example, many applications use BTC, ETH, TRX, and other cryptos to carry out economic activities to ensure the openness and transparency of funds.

The realization of such an immutable distributed ledger is a very complex system engineering, involving many technical fields: such as p2p networks, smart contracts, databases, cryptography, consensus mechanisms, etc. Among them, the database is the basis of the underlying storage, and various blockchain teams are exploring the design and optimization of the database level.

The UTXO model is stateless, makes it easier to process transactions concurrently, and has better privacy, but it is not programming-friendly.

In the Account Model, user data is stored in the corresponding account, and smart contracts are also stored in the account in the form of code. This model is more intuitive and easier for developers to understand. For programmability, flexibility, and other considerations, java-tron adopts the Account Model.

The current mainstream consensus is PoW, PoS, DPoS, etc. PoW is proof of work, all nodes participate in the calculation of an expected hash result, and the node that first calculates the result has the right to produce a block, but as the computing power continues to increase, the energy consumption required to calculate the hash is also increasing. Moreover, large mining farms monopolize most of the computing power, which also goes against the original intention of decentralization.

To solve the problems faced by PoW, some people proposed PoS (Proof of Stake), which is simply understood as the more coins that the node holds, the greater the probability of obtaining the right to produce blocks, but this will lead to monopoly problems as well. In order to improve, DPoS (Delegated Proof of Stake) is proposed: the decentralization feature is guaranteed by the elected super representative, and the super representative is responsible for the block production in turn to improve the efficiency. Java-tron currently adopts the DPoS consensus mechanism.

To learn more, please refer to Delegated Proof of Stake.

There are certain differences between blockchain and traditional Internet business. The blockchain does not have particularly complex processing logic at the database level, but there are a large number of key-value read and write operations in the blockchain so there are higher requirements for data read and write performance.

As we all know, the blockchain mainly stores transaction data. Before introducing the chainbase module, you need to understand the transaction processing logic in java-tron. 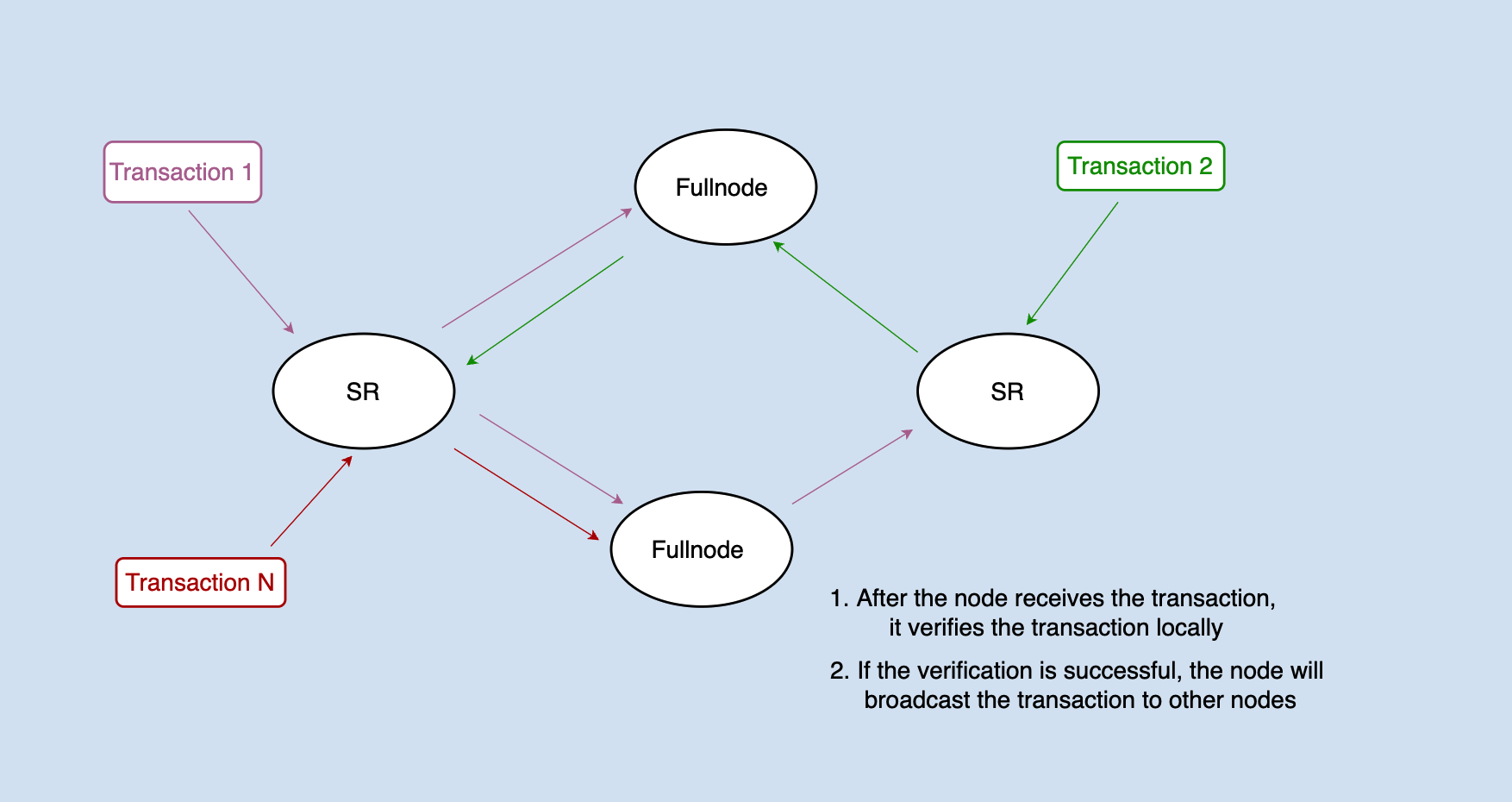 Note: The specific implementation of java-tron deviates from the above figure, and for the sake of convenience, this article collectively refers to the FullNode and SR as the nodes.

For example, to process a transfer transaction: user A transfers 100 TRX to user B, and it needs to validate whether user A has enough balance to make the transfer.

The consensus of java-tron follows a principle: that is, the transactions in the blocks that are approved by more than 2/3 of the SRs are the ones that are really successful on the chain. can also be understood as below,

A transaction that satisfies the above two points is a successful transaction on the chain. A transaction in java-tron is finally confirmed through three stages,

Therefore, except for the processing transaction data in blocks approved by more than 2/3 SRs, all other data state changes resulting from transaction processing may need to be rolled back. There are three kinds of scenarios in total:

The data state changes caused by these three scenarios may need to be rolled back and the following section explains why.

Rollback after Receiving a New Block¶

When receiving a new block, the node needs to roll back to the state at the end of the previous block and roll back all transactions validated afterward. As shown below, 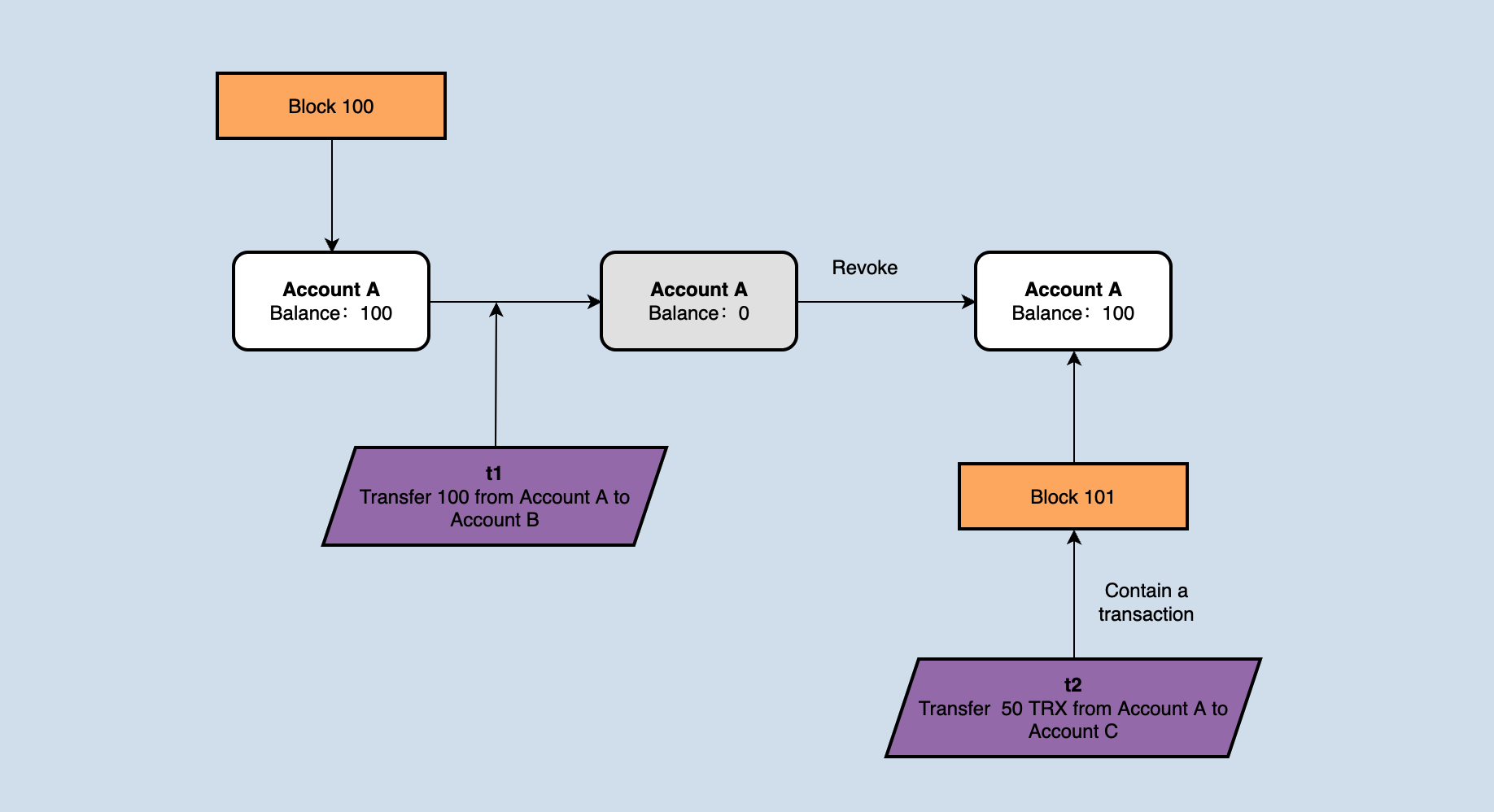 Rollback after Producing a New Block¶

This is the last rollback situation, and the blockchain will inevitably fork, especially the blockchain system based on DPoS with a faster block production speed that is more prone to fork.

java-tron maintains a data structure in memory as below,

This chapter explains receiving and validating transactions, block production, validating and saving blocks from the perspective of code, to further analyze the chainbase module of java-tron. If there is no further declaration, the default description is dedicated to all the Fullnode (including SR). 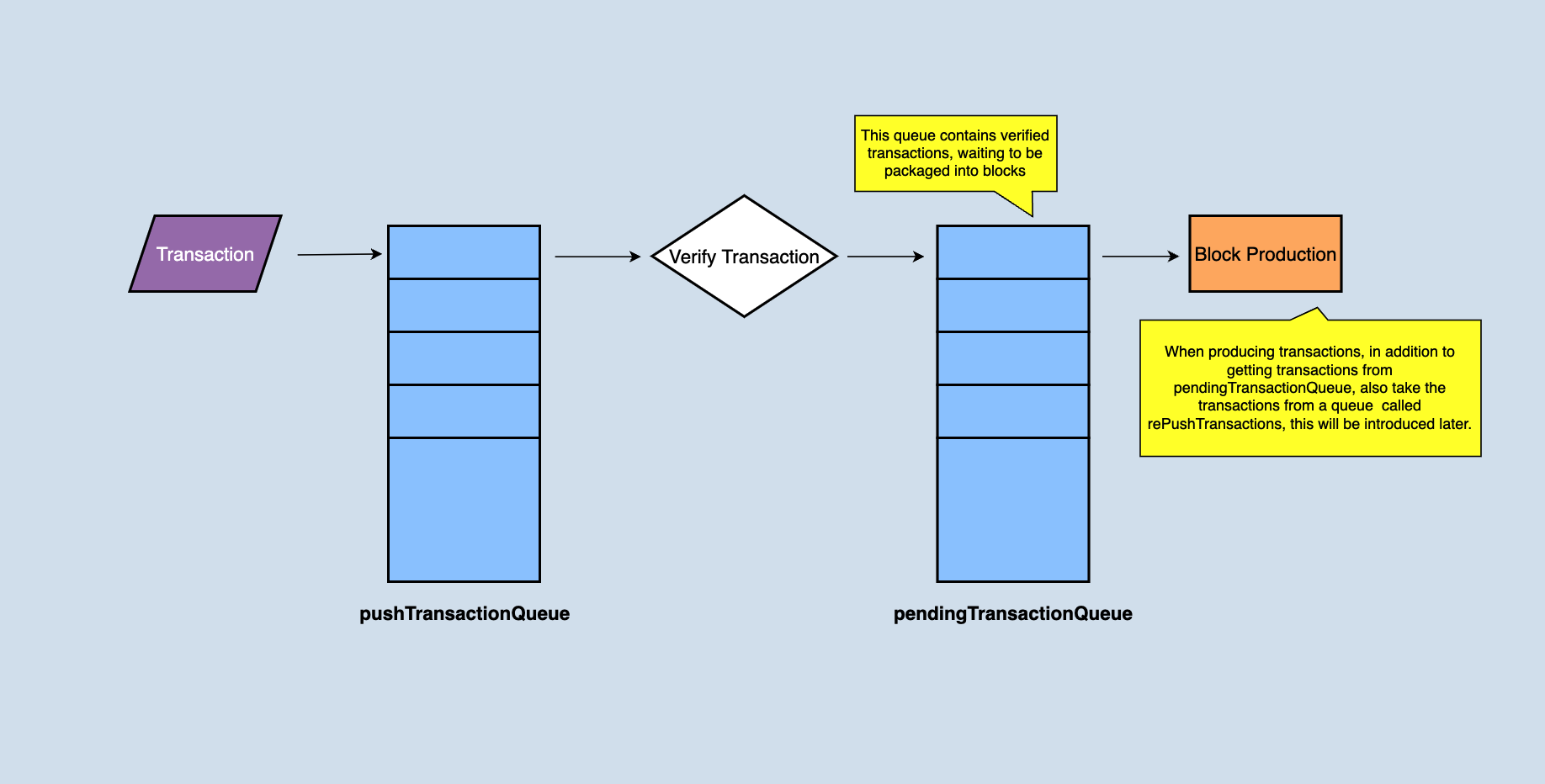 A node would receive transactions broadcasted from other nodes before receiving a new block, the transactions need to be validated to determine whether they can be executed correctly. Validation means that the state needs to be changed, and a successful validation does not mean that the transaction will be finally executed, and it will be considered successful after packing into a block and the block become solidified. This step can be considered to filter out those obviously wrong transactions in advance. This is just validation. When a new block arrives, the state changed by transaction validations should be rolled back. Only the state changed when applying new blocks will not be rolled back. 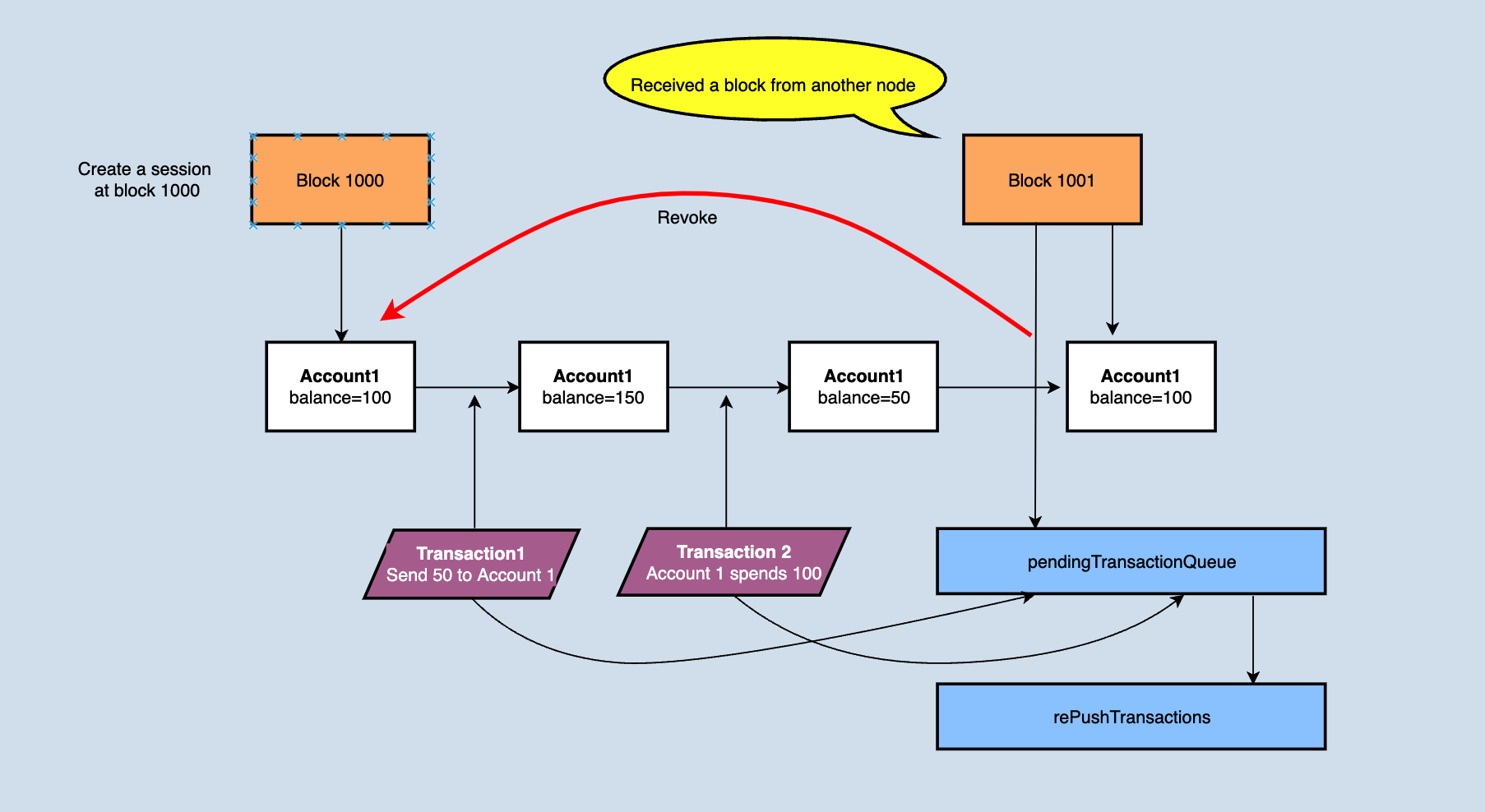 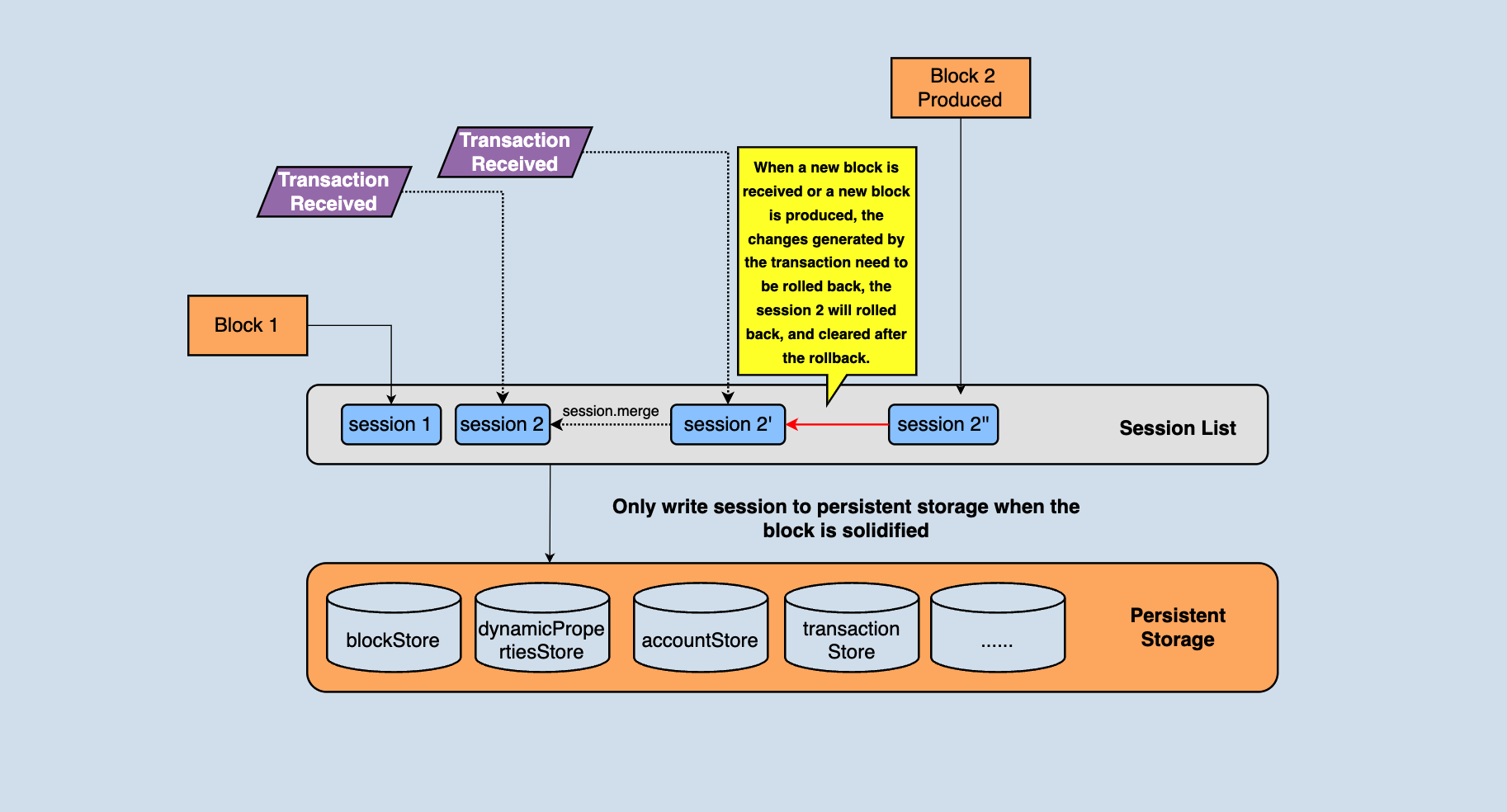 In the above figure, you can see that there are many different types of databases in persistent storage. These data are jointly organized into a complete blockchain. For example, blocks are stored in khasodb and blockStore, and account information is stored in accountStore...

The node maintains a session chain table, which stores the change information corresponding to the block/transaction, and the node can roll back through the change information. In the above figure, session1 is the status change of the current highest block. When a transaction is received, a new session2 will be generated. Each transaction that comes later will generate a temporary tmpSession, and after the transaction is validated, the tmpSession corresponded will be merged to session2. Before a new block is received again, all status changes generated by transaction validation will be saved in session2. When a new block arrives, directly execute the reset method of the session2 to roll back the state to the previous block.

SR needs to roll back before producing blocks. The reasons are more complicated. Let's consider a scenario first: 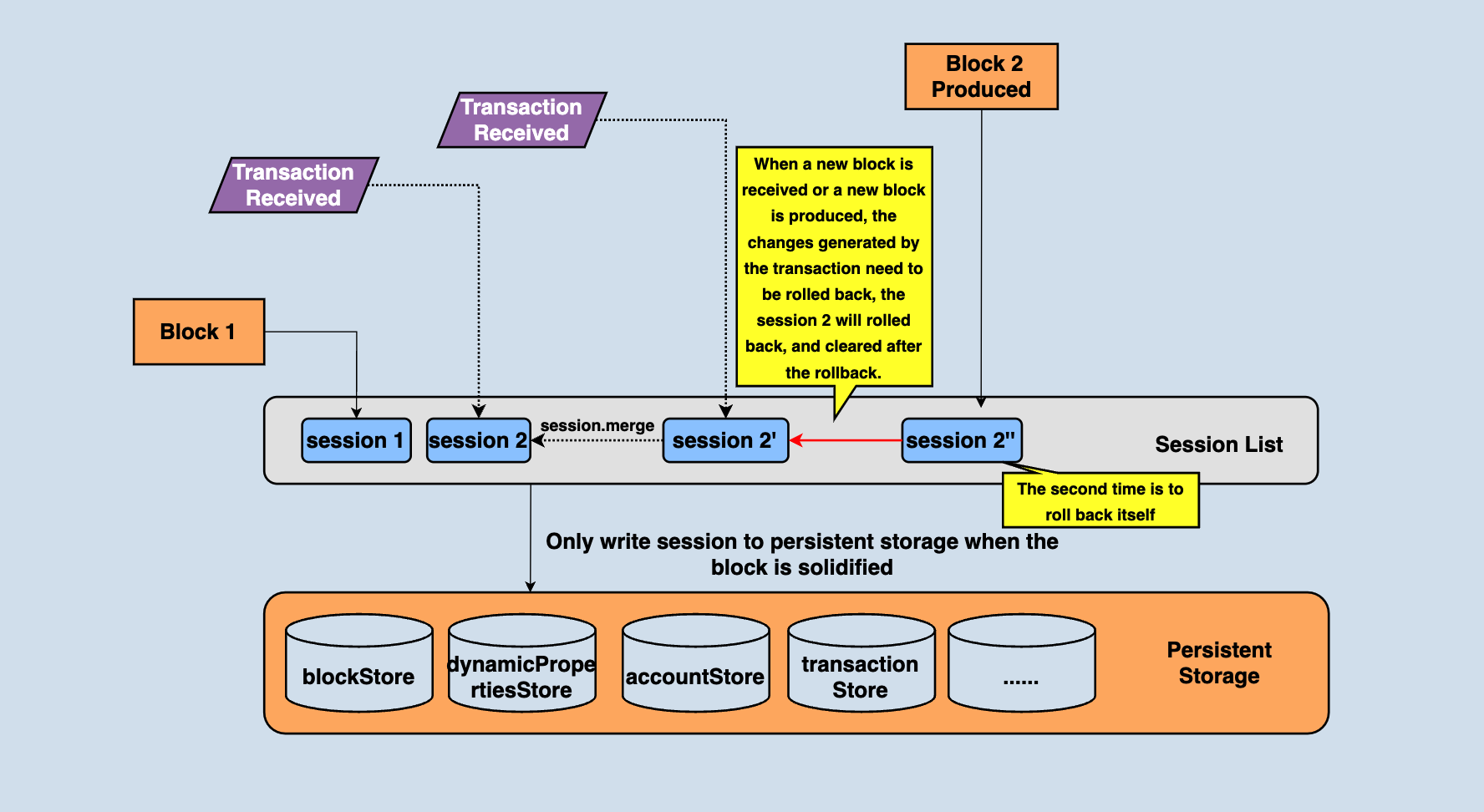 Java-tron adopts the DPoS consensus mechanism. The DPoS of java-tron is to vote for 27 nodes as block producers (also known as SR), SR has the right and obligation to produce blocks, and blocks approved by more than 2/3 of SR are considered to reach a consensus. These blocks, which are no longer rolled back are called solidified blocks. Only solidified blocks can be written to the database.

SnapshotManager in Java-Tron is the key entry to the storage module, holds references to all current business databases, and stores database references in a list. Each database instance supports adding a new layer of state set on its own called SnapshotImpl. It is an in-memory hashmap, multiple SnapshotImpl are associated in the form of a linked list, and one SnapshotImpl retains the data modification (in-merging or merging) involved in one state change, and SnapshotImpl is independent of each other. They are separated through this data structure, as shown in the following figure, 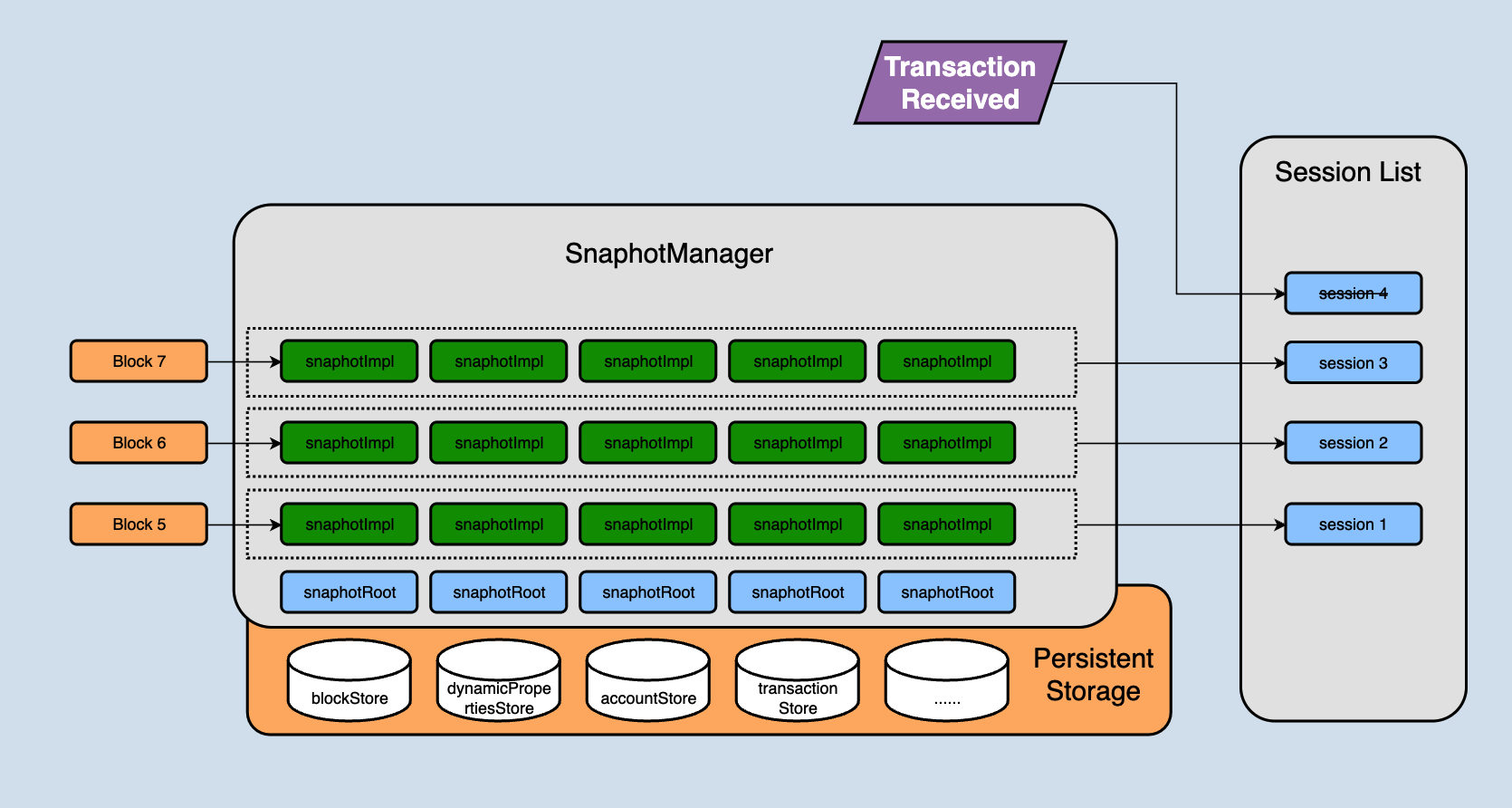 The SnapshotRoot in the above figure is the encapsulation class for the persistent database, which is responsible for storing the solidified data.

There are two variables in SnapshotManager: 'size' and 'maxSize'. Here we simply understand 'size' as how many layers of snapshotImpl are there currently in memory, and 'maxSize' represents the difference between the height of the current solidified block and the latest block.

The two implementations have their own advantages. A single instance is easy to maintain and can be written uniformly, but the disadvantages are also obvious. For example, the amount of data in a single database continues to grow over time, and frequent access to some business databases may drag down the read-and-write performance of other businesses.

Multi-instance does not have the problem of the mutual influence of each business data read and write, and can configure different parameters according to their respective data volume and performance requirements to maximize performance, and can also independently split the database with a large amount of data. Alleviate data bloat problems. But there is a serious problem with multiple database instances: there is no native tool to support atomic writes among multiple database instances.

The process of writing the snapshotImpl of the solidified block to the database in the previous section mainly includes two steps,

The operation of creating a checkpoint is more critical. A checkpoint is to persistently store the snapshotImpl in memory that needs to be written to the database in a tmp database (currently, the underlying implementation is leveldb and rocksdb). After the checkpoint is successfully created, the snapshotImpl will place on the disk. If the machine is down while placing, it will first search for the existence of tmp checkpoint data when the node restart. And if so, the data in the checkpoint will be played back to snapshotRoot. 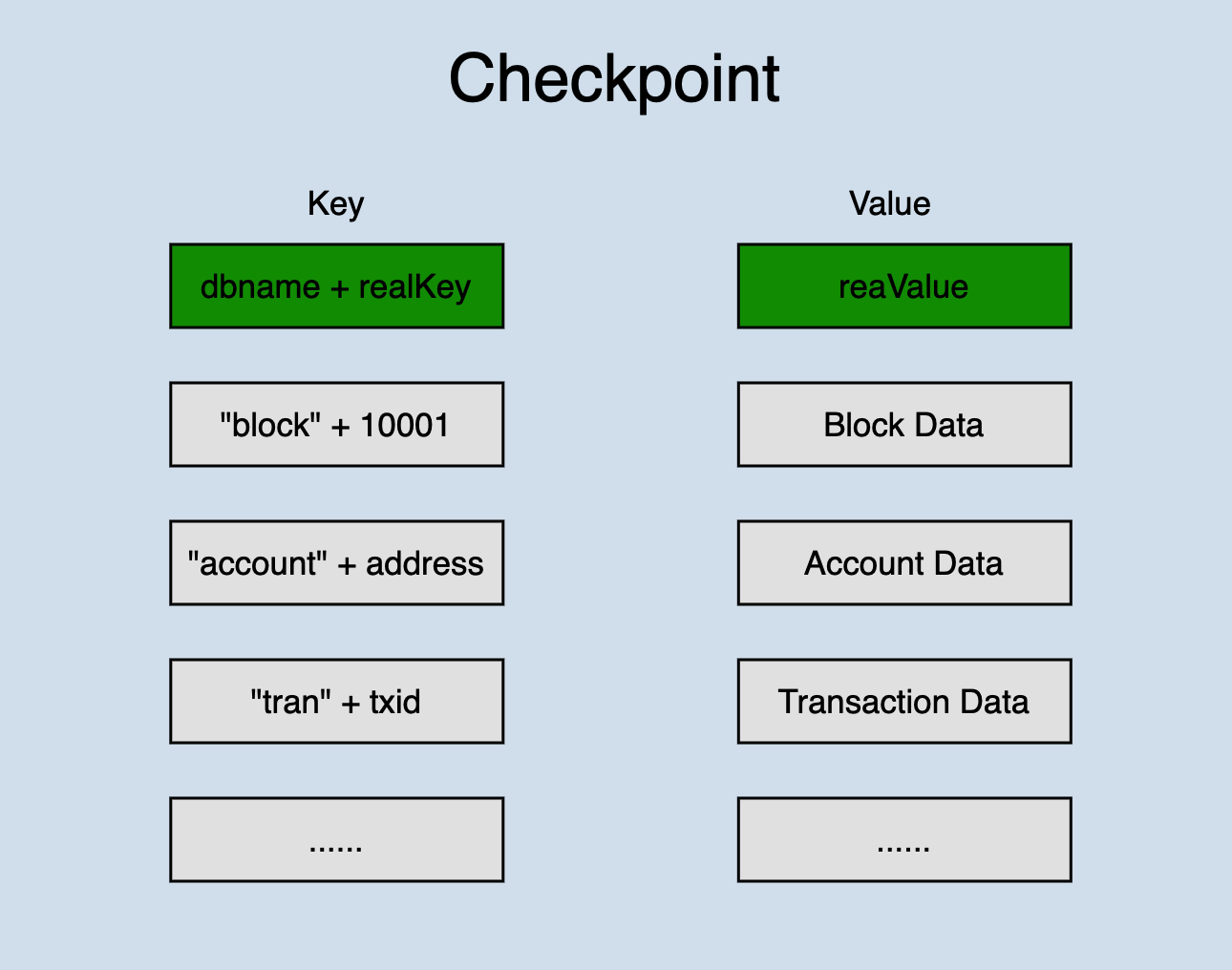 Checkpoint stores all data of a state change in one database. Different types of data are distinguished by prefixes. In order to ensure that all changed data can be placed on disk this time, the bottom layer of the database calls writeBatch() when writing.

This solution can be summarized as,

This article analyzes the implementation details of rollback and database writing in the chainbase module through the processing flow of transactions and blocks and also analyzes the principle of atomic writing among multiple instances of the database to prevent database damage caused by accidental downtime. We hope that reading this article can help developers to further understand and develop the java-tron database.