P2P is a distributed network in which participants in the network share a part of the hardware resources they own, such as processing power, storage capacity, network connection capacity, printers, etc. These shared resources need to be provided services and content by the network, which can be accessed by other peers directly without going through an intermediate entity. Participants in this network are both providers and acquirers of service and content.

Different from the traditional Client/Server central server structure, the status of each node in the P2P network is equal. While serving as a client, each node can also serve as a server to provide services to other nodes, which greatly improves the utilization of resources.

The architecture diagram of TRON is as follows: 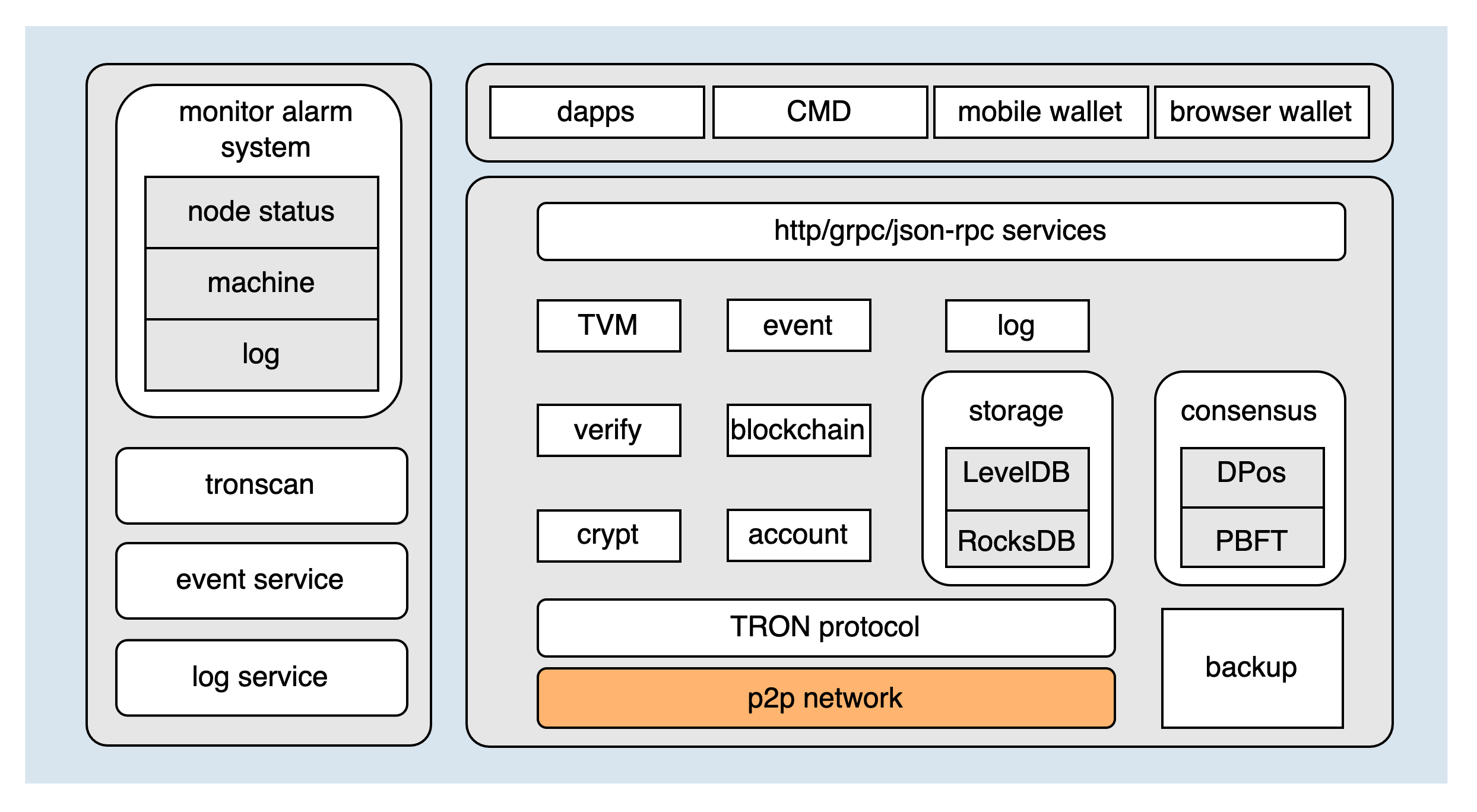 As the most fundamental module of TRON, the P2P network directly determines the stability of the entire blockchain network. The network module can be divided into the following four parts according to the function:

Below will separately introduce these four functional parts.

Node discovery is the first step for nodes to access the blockchain network. The blockchain network is a structured P2P network which organizes all nodes in an orderly manner, such as forming a ring network or a tree-like network. Structured networks are generally implemented based on the DHT (Distributed Hash Table) algorithm. Specific implementation algorithms include Chord, Pastry, CAN, Kademlia and so on. The TRON network uses the Kademlia algorithm.

Kademlia is an implementation of Distributed Hash Table (DHT), it is the core routing technology in the decentralized P2P network and can quickly find target nodes in the network without a central server.

For a detailed introduction to the algorithm, please refer to Kademlia.

The main points of the Kademlia algorithm implemented by TRON are as follows:

After the node is started, it will read the seed nodes configured in the node configuration file and the peer nodes recorded in the database, and then send DISCOVER_PING message to them respectively. If the reply message DISCOVER_PONG from a peer is received, and at the condition that the K bucket is not full, it will then write the peer node into the K bucket; But if the corresponding bucket has already been full (that is the bucket has reached 16 nodes), it will challenge to the earliest node in the bucket. If the challenge is successful, the old node will be deleted, and the new node will be added to the K bucket. That is the K bucket initialization process, then the node discovery process is performed.

The node discovery algorithm used in DiscoverTask and RefreshTask will be executed 8 rounds in one call, and each round sends DISCOVER_FIND_NODE message to the 3 nodes closest to the target node ID in the K bucket, and waits for a reply.

Nodes periodically perform node discovery tasks, continuously update K-buckets, and build their own node routing tables. The next step is to establish a connection with nodes.

Before understanding how to establish a TCP connection between nodes, we need to first understand the peer node type.

The local node needs to manage and classify peer nodes for efficient and stable node connection. Remote nodes can be divided into the following categories:

After the node is started, a scheduled task poolLoopExecutor will be created to establish a TCP connection with nodes. It will select nodes and establish connections with them. The working process is as follows:

The TCP connection can be mainly divided into two steps: first, determine the node list which the node will establish a connection with. The list needs to contain the active nodes that have not successfully established a connection, and then calculate the number of connections that also need to be established, and filter out the nodes from discovered neighbors according to the node filtering strategy, then score and sort them according to the node scoring strategy, and the corresponding number of nodes with the highest score is added to the request list. Finally, TCP connections are established with the nodes in the request list.

When establishing a node connection, it is necessary to filter out the following types of nodes and determine whether the node's own connection number has reached the maximum value.

But for trusted nodes, some filtering policies are ignored and connections are always established.

After the TCP connection is successfully established, the node that actively initiates the TCP connection request will send a handshake message P2P_HELLO to the neighbor node, in order to confirm whether the blockchain information between the nodes is consistent and whether it is necessary to initiate the block synchronization process.

When the neighbor node receives P2P_HELLO, it will compare with the local information, such as checking whether the p2p version and the genesis block information are consistent. If all the check conditions are passed, it will reply to the P2P_HELLO message, and then perform the block synchronization or broadcast; otherwise, it will disconnect the connection.

Channel keep-alive is accomplished through P2P_PING, P2P_PONG TCP messages. When a node establishes a TCP connection with a neighbor node and handshakes successfully, the node will open a thread pingTask for the connection and periodically send P2P_PING messages to maintain the TCP connection, which is scheduled every 10s. If the P2P_PONG message replied is not received within the timeout period, the connection will be terminated. 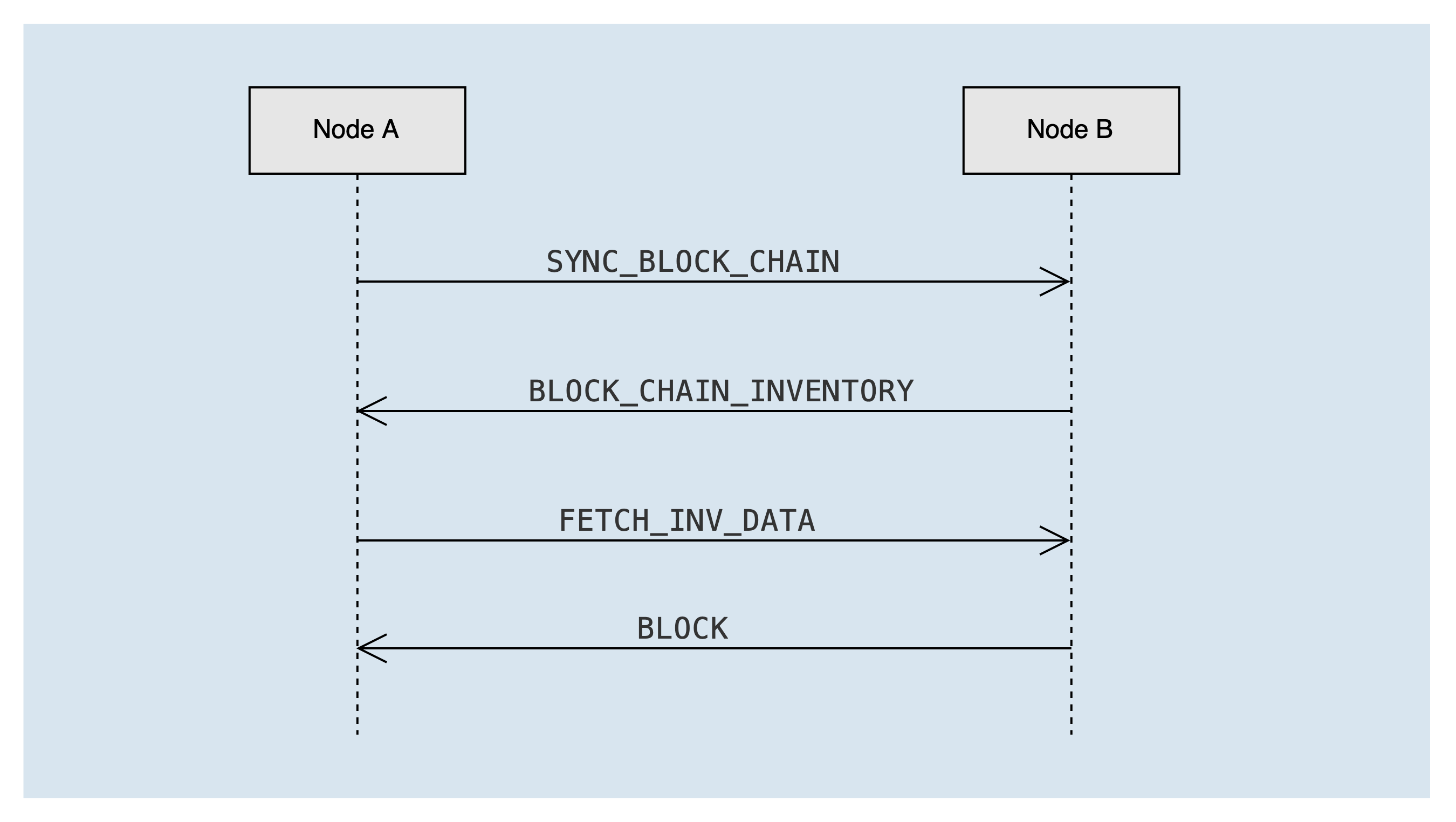 Node A sends an SYNC_BLOCK_CHAIN message to peer node B to announce the blockchain summary information of the local chain. After the peer node B receives it, it calculates the list of missing blocks of node A, and sends the lost block ID list to node A through the BLOCK_CHAIN_INVENTORY message, carrying a maximum of 2000 block ids at a time.

After node A receives the BLOCK_CHAIN_INVENTORY message, it gets the missing block id, and sends a FETCH_INV_DATA message to node B asynchronously to request the missing block, up to 100 blocks at a time. If there are still blocks that need to be synchronized (that is, the remain_num in the BLOCK_CHAIN_INVENTORY message is greater than 0), a new round of block synchronization process will be triggered.

Below will take several different block synchronization scenarios as examples to illustrate the generation of the blockchain summary and the lost block ID list. 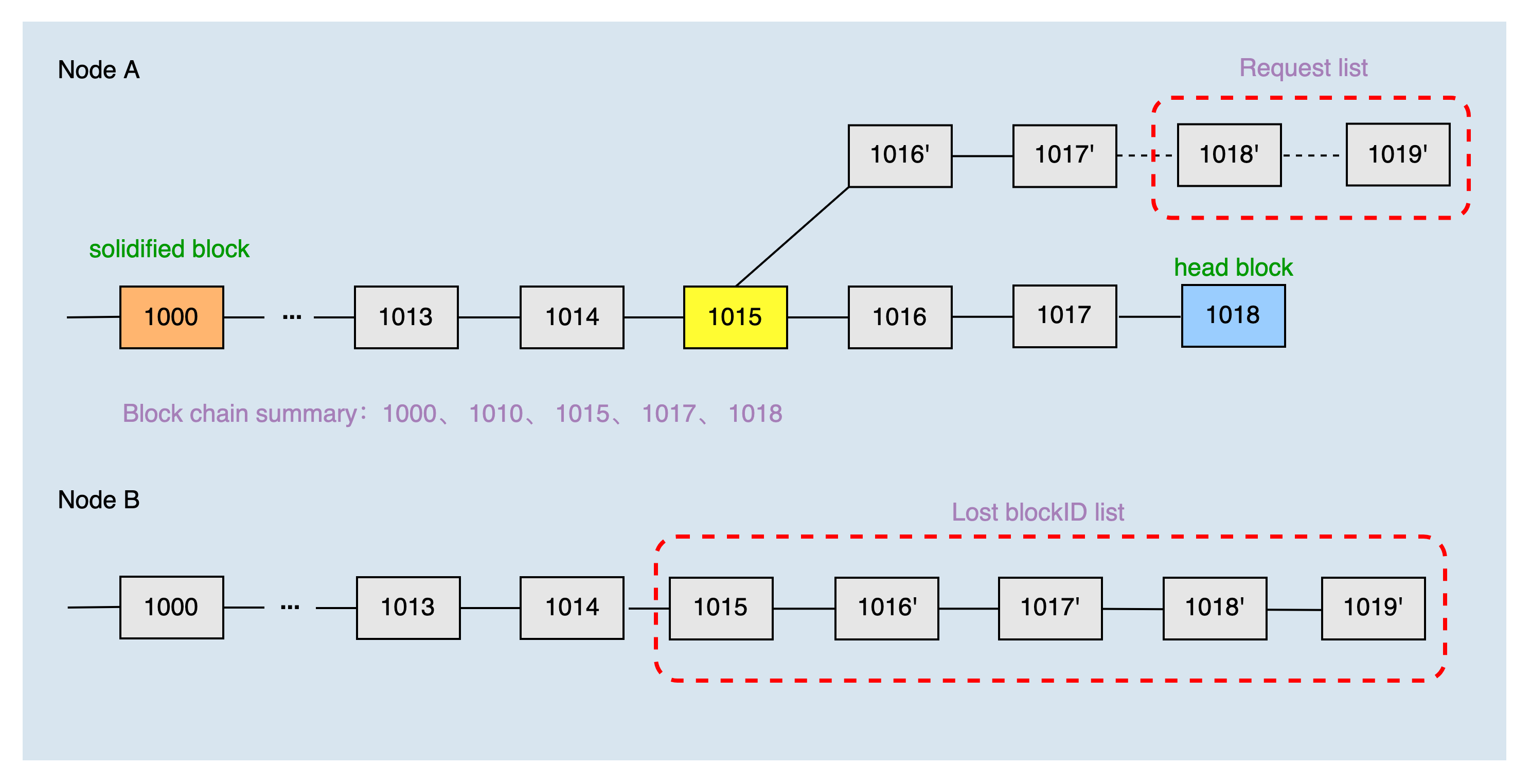 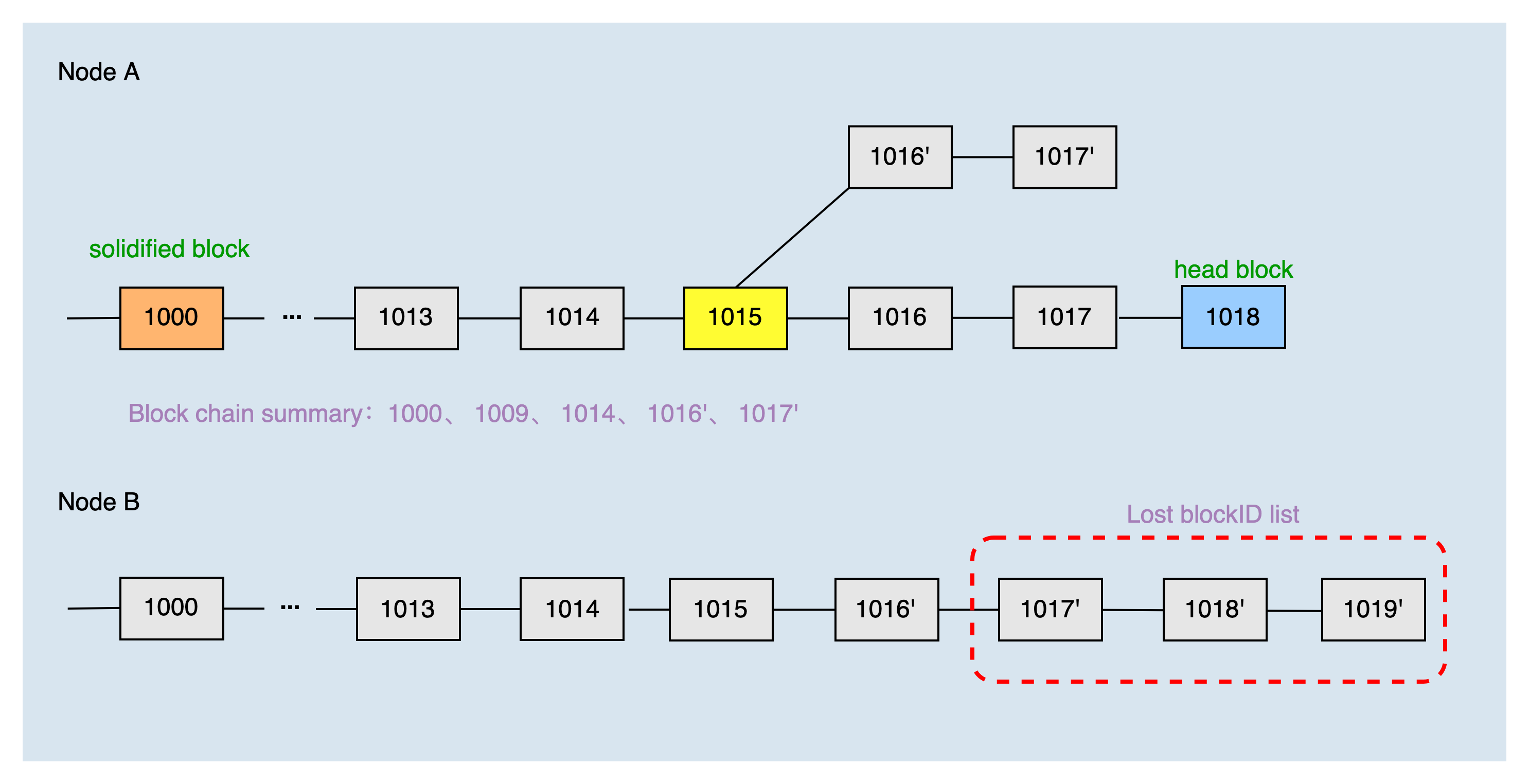 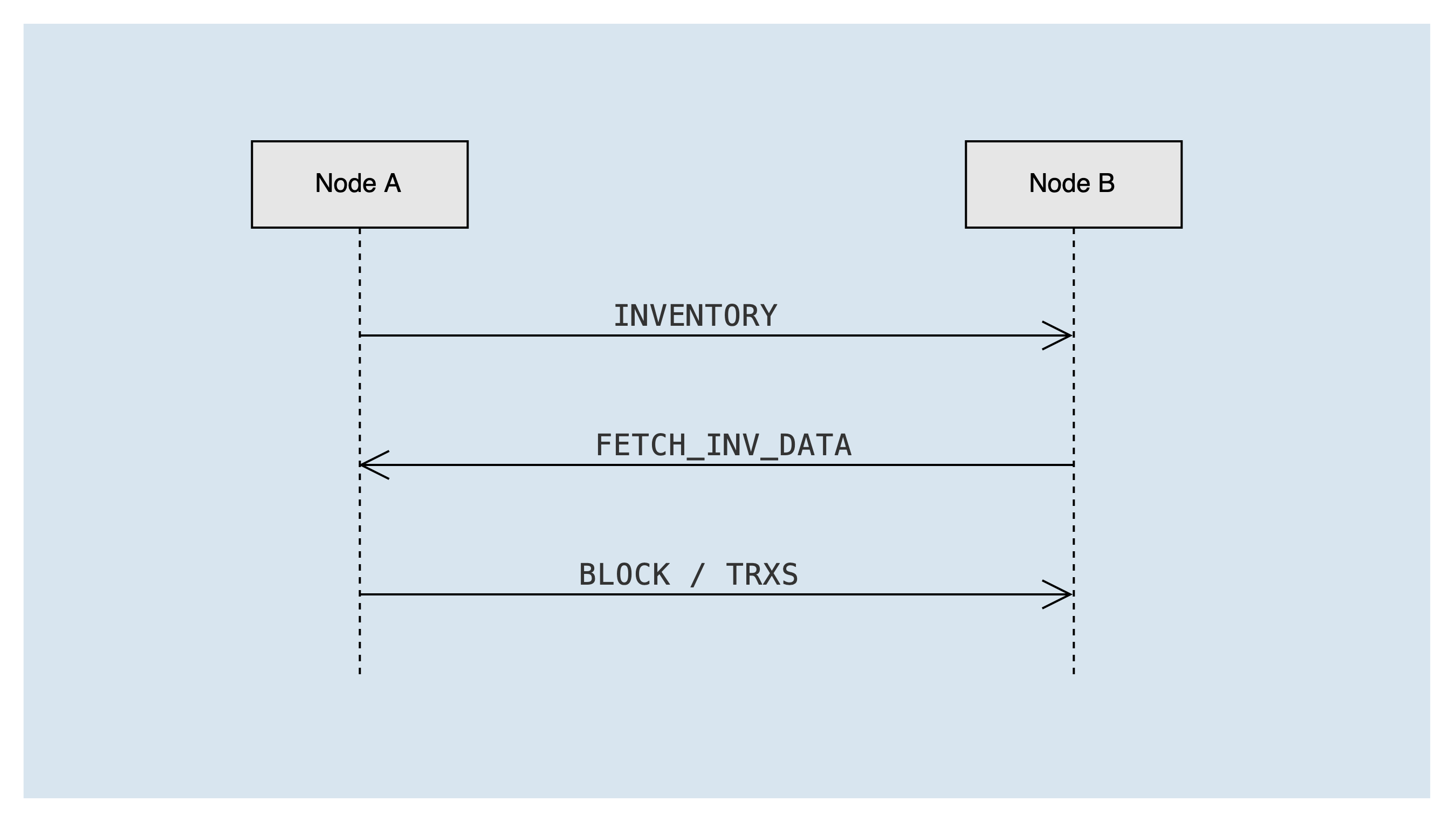 The types of messages involved include:

Node A sends the transaction or block to be broadcast to Node B via the INVENTORY list message. After node B receives the INVENTORY list message, it needs to check the status of the peer node, and if it can receive the message, it puts the blocks/transactions in the list into the "to be fetched queue" invToFetch. If it is a block list, it will also trigger the "get block & transaction task" immediately to send a FETCH_INV_DATA message to node A to get the block & transaction.

This article introduces the implementation details related to the P2P network, the lowest level module of TRON, including node discovery, node connection, block synchronization, and the process of block and transaction broadcasting. I hope that reading this article can help developers to further understand and develop java-tron network-related modules.